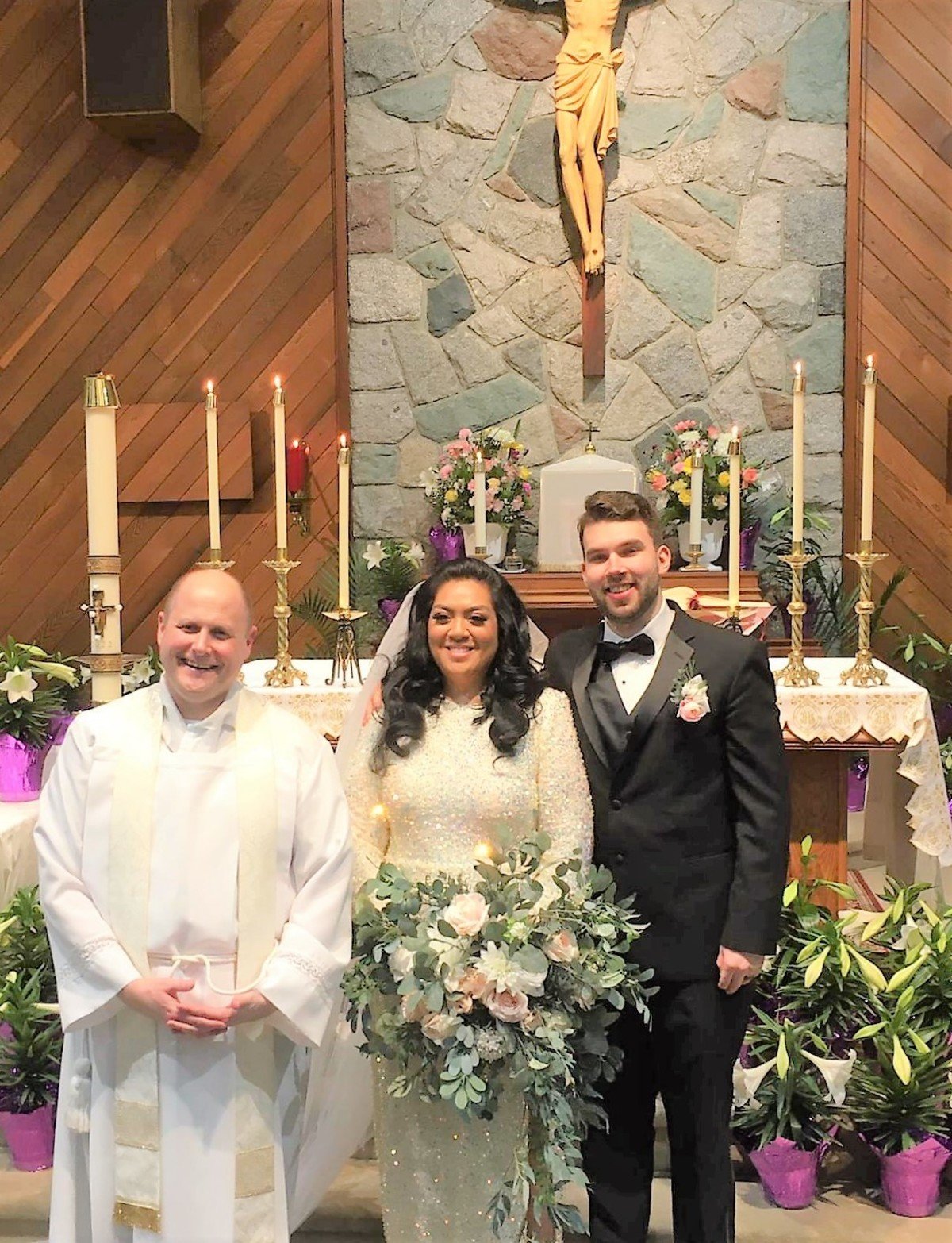 An Easter Vigil like no other: New Catholic follows Confirmation with wedding vows – BC Catholic

In the happy times following the end of last month’s Easter Vigil at St. Joseph’s in Port Moody, nine of the 10 men and women who were baptized or confirmed that evening began to leave the sanctuary with their families and their friends, most heading to a gathering celebration in the adjoining church hall.

But there was one left – Mark Witecki, a 28-year-old electrician who had been confirmed that evening. Removing his red Confirmation dress to reveal his black tuxedo, Witecki stayed behind because he had planned his own special celebration, one that would see him receive an additional sacrament that night: the Holy Matrimony.

Witecki was soon joined at the altar by Danda Santos, a 38-year-old financial day-trader. With only a few relatives present as witnesses, they were married within half an hour.

The unusual moment of the wedding ceremony culminated a remarkable journey for the couple, which not only led them to discover their love for each other, but also saw Mark embrace the Catholic faith and, in the process, bring Danda to kiss hers again.

The two met through an online dating service and started dating a few years ago, Danda said in an interview. As their relationship grew, so did their interest in the Church.

Danda, a graduate of Archbishop Carney Regional Secondary in Port Coquitlam, had an “on again, off again” relationship with her faith, while Mark, who had not been raised in any religion, sought.

After Mark’s mother became a Catholic and began attending mass at Christ the King in Langley, Mark began catechism classes there and was eventually baptized.

“While he was doing his catechism, I asked if I could join him because I had no more practice,” Danda said. “Basically, I knew I could really learn something. My other thought was that we’re starting to get pretty serious here, and if we’re going to raise our kids in the Church, I want to know what you’re learning.

Danda, a divorced woman who was previously married in a civil ceremony, said she had longed to return to the Church for years but felt she was not worthy. “I felt like I didn’t deserve forgiveness,” she said. “I didn’t deserve God’s love.”

The couple made plans for a church wedding at a Vancouver-area parish in late February, but last-minute complications arose that forced them to change their plans. With relatives arriving from the Philippines and with other arrangements already confirmed, they decided to marry in a civil ceremony and seek a new parish for a church wedding later.

This brought them to St. Joseph’s in Port Moody, where Mark completed his RCIA studies leading to his confirmation. With the couple wanting to wed as soon as possible after confirmation, Pastor Father Mark McGuckin suggested a ceremony after the Easter Vigil.

In the weeks leading up to the ceremony, the couple moved into separate rooms in their Coquitlam apartment and made sure they were in a state of grace before taking their sacred vows.

They credit an archdiocesan advisor with advising them on this course of action. “She really helped frame it for us, so it became really important to give to each other in the purest form possible,” Danda said.

“It was definitely very important to me to be married in that state of grace. It felt like it was the purest form of love that we could be united, in the Church, and really receive the sacraments in the best possible way.

Mark said he was grateful to have communicated with Father McGuckin. “We found St. Joseph by the grace of God,” he said. “God has a plan for us. He put us in touch with one of the best priests we have ever met.

Now married in the Church, the couple is looking forward to having children and raising a Catholic family. It’s unclear exactly where this will take place, as Mark and Danda are leaving Canada for a few months to figure out if they should move to another country.

If there’s a lesson to be learned from the couple’s story, it’s “never give up,” said Mark, who is delighted he and Danda haven’t given up on their desire to get married at the moment. Church.

Danda accepted. “It’s amazing,” she said of her church wedding. “It’s such an amazing feeling, and I feel so blessed that we were able to do this.”

What NOT to put in the village dumpsters during cleaning week

Rehabilitated Noosa Forestry to be transferred to Tewantin National Park