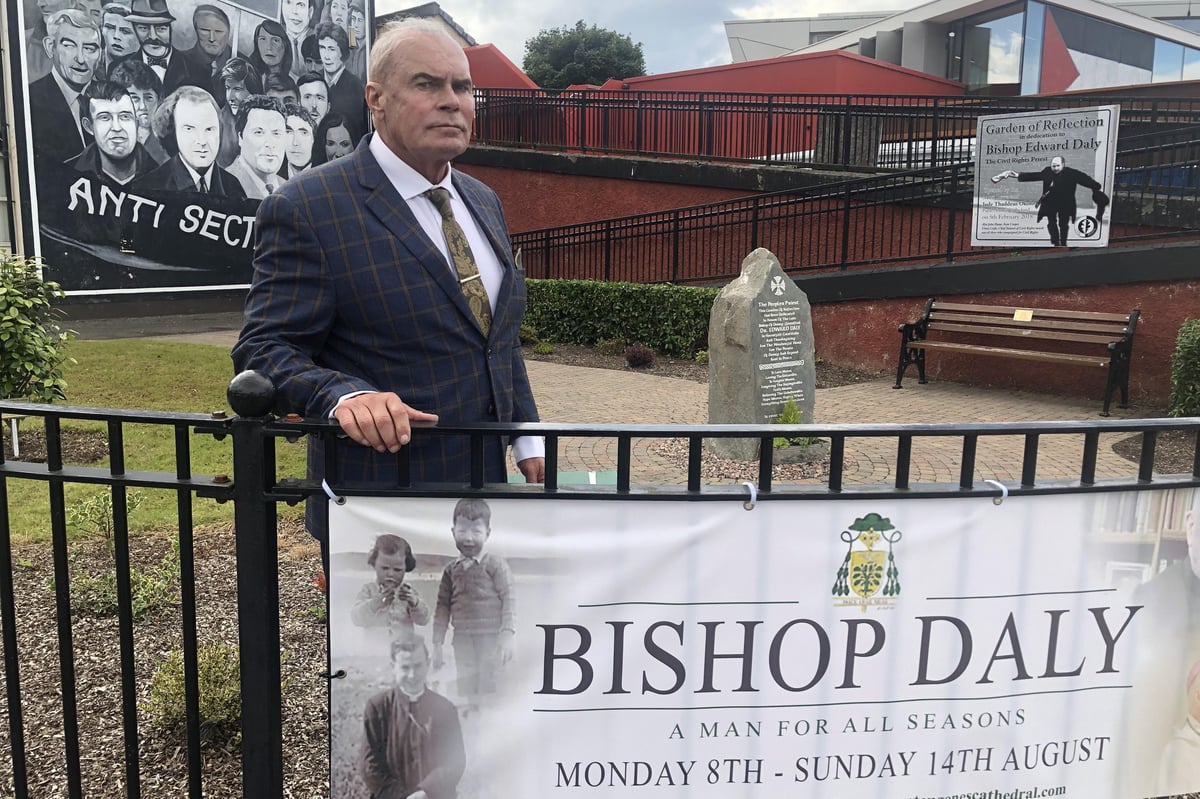 The Garden of ReflectionCommittee has issued an open invitation to those attending the new exhibition dedicated to the life and works of the Bishop of Daly to also visit the garden created in his memory.

The exhibit, titled ‘Bishop Daly – A Man for All Seasons’, celebrates the life, influence, work and legacy of Bishop Edward Daly and opened on Wednesday this week.

‘A Man for All Seasons’ marks the sixth anniversary of Bishop Daly’s death and is now on display at St Eugene’s Cathedral Hall, Infirmary Road, BT48 7PB, until August 14.

Vincent Coyle at the renovated Garden of Reflection.

To coincide with this, the Reflection Garden in Glenfada Park dedicated to Bishop Daly has been completely renovated.

Speaking on behalf of the committee looking after the garden, Vincent Coyle congratulated the exhibit organizers and the diocese for honoring Bishop Daly’s memory with the new exhibit. “We wish them success and we believe this will let more people know about the great job he did. He was indeed a man for all seasons,” he said.

Mr Coyle, himself a civil rights activist, said it was vital, especially for younger generations, to realize the colossal contribution of Bishop Daly as a “man of reconciliation and peace”, who worked alongside other civil rights leaders such as John Hume and Ivan Cooper. .

“For me, it’s about educating young people about the past, and this exhibition is so important for young people in Derry to come and see, listen and watch.

“Not only was he the local priest, bishop and civil rights priest, but Bishop Daly also administered and worked at Foyle Hospice for 21 years.

“He improved the lives of so many souls on an individual basis, and even when he was going through his own illness, he always stayed in hospice.”

Mr Coyle said the Bogside Garden was there as a permanent memorial and tribute that members of the wider community had taken to heart and helped maintain.

The Committee invited those present at the exhibition to make the short journey from the cathedral hall to the garden, previously described as a tranquil place, a sanctuary in the heart of the parish where Bishop Daly administered as a priest at most much trouble.

The launch of the exhibit was attended by Bishop Daly’s family, the current Bishop of Derry Dr Donal McKeown and Mayor of Derry & Strabane Sandra Duffy, among others, on Wednesday afternoon.

The title of the exhibition was, according to the organizers, chosen to pay tribute to the “wide and varied contribution of Dr Daly to peace and reconciliation in Ireland, to Derry and its diocese, to the search for justice and to the appeasement of the differences which divide the North”. Ireland”.

The exhibition – which is supported by the Derry & Strabane Council – will feature artefacts relating to all aspects of the late bishop’s life, including his mitre, crosier and various manuscripts. It will also include film footage and photographs from throughout his life.

Born in Ballyshannon, County Donegal, but brought up in Belleek, County Fermanagh, Edward Kevin Daly served as Bishop of Derry from 1974 to 1993.

While serving as vicar of St. Eugene’s Cathedral, he came to the world’s attention on Bloody Sunday, January 1972, waving a bloodstained white handkerchief as he escorted a party carrying a fatally wounded Jackie Duddy into the streets of the Bogside.

He resigned as Bishop of Derry due to ill health, but continued his work as a chaplain at Foyle Hospice until shortly before his death in the summer of 2016. He has published two volumes of memoirs.

Partial road closure effective August 8, 2022 in the Village of Germantown