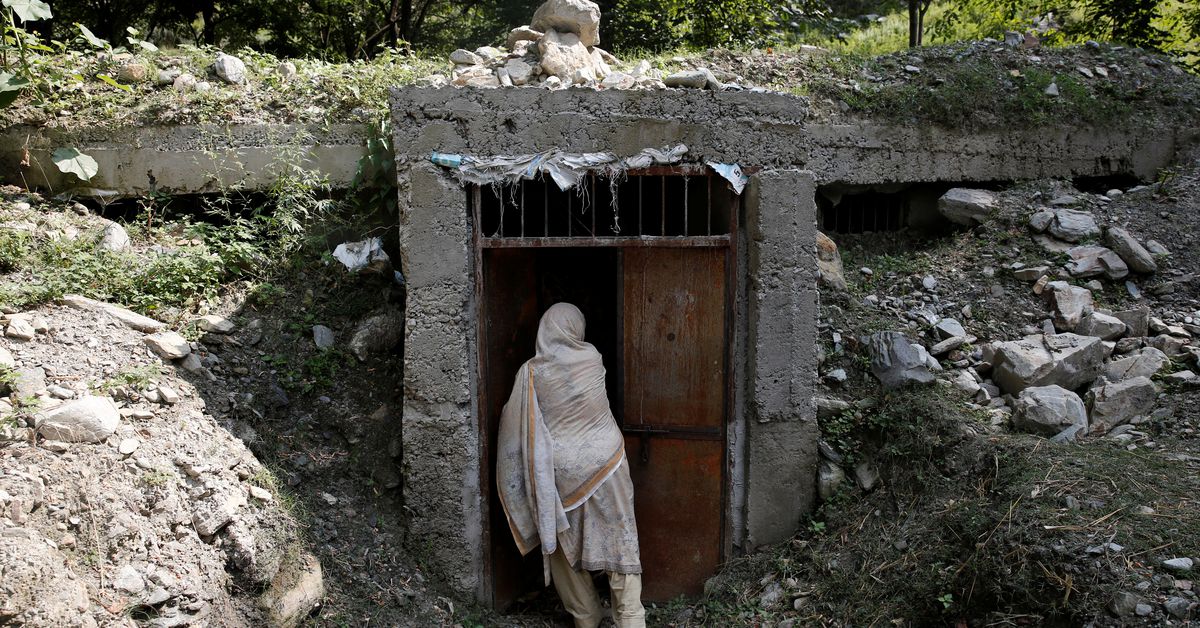 “Line through our hearts”: A village in Kashmir, 75 years after partition

TEETWAL, India/CHILEHANA, Pakistan, Aug 12 (Reuters) – A roaring Himalayan river and one of the world’s most militarized borders separate the Khokhar family in Kashmir, a mountainous region divided between India and Pakistan – from rivals who gained independence from Britain 75 years ago.

Abdul Rashid Khokhar lives on the Indian side, in the village of Teetwal.

Across the flowing waters of the Neelum River, also known as Kishanganga, his nephews – Javed Iqbal Khokhar and Muneer Hussain Khokhar – run small shops in the hamlet of Chilehana in Pakistan.

Above them, on both sides, rise high green mountains from which the military of the nuclear-armed neighbors intermittently rained mortars, shells and small-arms fire on each other. others over the decades.

Since early 2021, the Line of Control (LOC), a 740 km (460 mile) de facto border that bisects Kashmir, has remained generally calm, following the renewal of a ceasefire agreement between India and Pakistan.

After years of shelling and destruction in this part of Kashmir, farmers have returned to abandoned fields and orchards, markets are bustling, small businesses are thriving and schools have resumed normal operations, residents of the two sides.

But the broken diplomatic relations between India and Pakistan, which fought two of their three wars in Kashmir, continue to cast a shadow over the region. Kashmir, claimed by both nations, remains the biggest unresolved issue between the two, much the same as in 1947.

India and Pakistan have no viable trade ties and their diplomatic missions are downgraded. Visas to visit either side are extremely limited.

Kashmir’s postcard-perfect valleys and mountains are divided into Pakistani and Indian sectors, while China controls part of the region to the north.

The narrow rope bridge that connects Teetwal to Chilehana is blocked on both sides by barbed wire, and no passage has been allowed since 2018.

Guard posts remain on both sides of the bridge, which straddles the LOC.

“The line runs through our hearts,” said Khokhar, a 73-year-old who is the head of Teetwal village council, referring to the LOC.

“It’s very traumatic that you can see your loved ones but you can’t talk to them, meet them.”

The Khokhars are among millions of families who found themselves divided following the partition of colonial India into independent nations, Hindu-majority India and Islamic Pakistan, at midnight on August 14-15, 1947.

MORE THAN A MILLION KILLED

Britain’s hasty division of the subcontinent sparked mass migration, marred by bloodshed and violence, as an estimated 15 million people sought to swap countries mainly because of their religion.

More than a million people have been killed in religious riots, according to numerous independent estimates.

Carnage swept through Teetwal during partition, but further destruction followed during the 1971 Indo-Pakistani War which ultimately led to the establishment of the LOC, Khokhar said.

In the 1990s, parts of Jammu and Kashmir, the only Muslim-majority state in the mainly Hindu nation, were plagued by a large-scale insurgency that New Delhi accused Pakistan of fomenting.

Islamabad has denied the allegation, saying it only provides diplomatic and moral support to Kashmiris seeking self-determination.

Pakistan also accuses India of human rights abuses in parts of Kashmir under its control, a charge that New Delhi denies.

On the Pakistani side of the Neelum River, Khokhar’s nephew Javed Iqbal Khokhar said he remembered a time when they couldn’t turn on the dim lights in their house in Chilehana because of the risk that they are hit by bombardments.

Endless shelling and mortar fire at the time forced the family to move their elders and most of their children away from the border to the relative safety of Muzaffarabad, a town 40 km (25 miles) away in Pakistan, did he declare.

“They’re still there – because you never know what’s going on and then getting them out will be a challenge,” the 55-year-old said.

On a hot afternoon this week, his brother Muneer Hussain Khokhar stood outside his small shop, overlooking an Indian settlement across the LOC, handing out bright green and white ice cream cones, matching the colors of the national flag. from Pakistan.

For years, commercial activity in the area was almost completely at a standstill and traffic on the road that runs alongside the Neelum has dwindled to a trickle due to constant clashes, he said.

Since the 2021 ceasefire, tourists have returned and the Khokhar brothers have been able to expand their business by creating two new shops.

“The ice cream is doing well,” the 32-year-old said as he served a cone.

There is no cellphone service in Chilehana, and the Khokhar brothers said they had not spoken to relatives across the border in years. The younger brother said he last visited the Indian side in 2012.

There are no tourists in India’s Teetwal, but residents of the once bustling town and surrounding settlements say they are also reaping some benefits from the cessation of hostilities.

In Dildar, a village adjoining Teetwal, the headmaster of the local school, Aftab Ahmad Khawaja, said he used to rush his 550 students to a secure room during the cross-border shootings.

“And after the bombing, only 25% of the students were attending school,” said Khawaja, 33. “For a year and a half, there is no problem.”

However, many still count the cost of the fighting that rocked the region.

On the night of September 19, 2020, a shell landed in the yard of Nasreena Begum’s house in the Indian village of Gunde Shaat, killing her husband – the sole breadwinner in a family of four.

“The hostilities and the shelling took everything from me,” said Begum, 35, who now cares for her two daughters and a son.

Along the Neelum in Pakistan, Umar Mughal hopes peace will continue, in part because it might allow him to expand his small restaurant which has stunning views of the Indian side.

“There has to be some kind of long-term solution, whatever it is, for the good of Kashmiris. Are we going to wait another 75 years?

Take out payday loans during inflation

The Fiji Times » Reps back in the pool