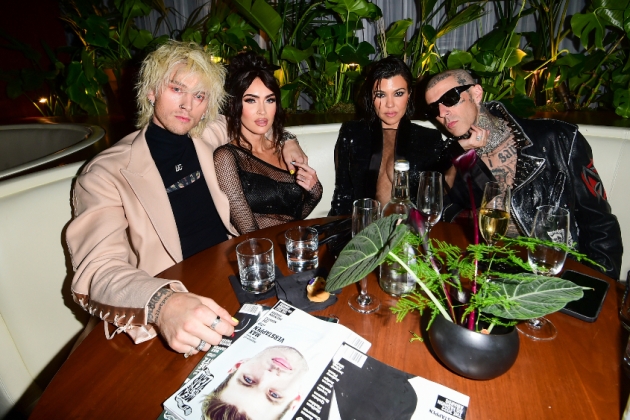 There was no shortage of good men on Thursday night, as GQ magazine once again invaded West Hollywood for its annual Men of the Year celebration.

At the top of the Sunset Strip, the Edition Hotel hosted its lobby restaurant and adjoining garden, where impossibly chic guests rubbed shoulders. The event offers some of the best people watching on the social calendar, and this year did not disappoint.

The star couples put on a show throughout the evening. Kourtney Kardashian and Travis Barker roamed the restaurant patio locked in each other’s arms and (very on-brand) not shy with PDA. Megan Fox and Machine Gun Kelly grabbed the two and sat down with the reality star and her drummer hubby over sushi and appetizers. Nearby, Emmy-winning couple Lucia Aniello and Paul W. Downs of “Hacks” cuddled up with friends. “Bros” stars Billy Eichner and Luke MacFarlane (not a real couple, but onscreen) towered over many little kings in the crowd.

The evening ended with a surprise performance by The Kid Laroi, who sang an acoustic version of his hit “Stay” with Justin Bieber. The 19-year-old Australian entered through a side entrance with the biggest entourage we’ve seen in some time. Behind every big man are three security guards, a manager, a best friend, and a looker who googles “Kid Laroi” and feels very old.

The best of variety