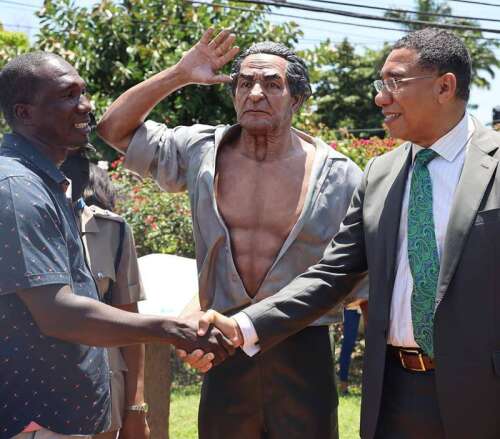 Prime Minister Andrew Holness (right) shakes hands with Scheed Cole, the visual artist who designed the statue of Sir Alexander Bustamante seen here in the centre. The occasion was the unveiling of the statue in Hanover last Friday.

LUCEA, Hanover – The importance of preserving the country’s history, erecting and maintaining monuments was underlined by Prime Minister Andrew Holness on Friday as he unveiled a life-size statue of national hero Sir Alexander Bustamante, who was Jamaica’s first independent head of government.

The $3million project, which includes the statue and two storyboards on the grounds of Hanover’s parish library, is the brainchild of Western Hanover MP Tamika Davis, who wanted to highlight Sir Alexander’s contribution to the nation-building in recognition of Jamaica’s 60th anniversary. Independence year.

“You get the feeling that improving infrastructure such as a monument, building a new monument – because it’s a special kind of infrastructure – improving municipal buildings, building a new Parliament, for example, it feels like a waste of money [and that] we shouldn’t do that, [and that] there are other things the $3 million could be used to do. And I’m sure all of you here and those listening on social media would agree that there are three million other things that $3 million could be used for,” Holness said.

“We struggle with this in our country because there is a lack of understanding in public discourse about what the symbols of our civil bureaucracy and our civil administration mean and what the monuments of our history mean. And that shows how we see our nation, how we see our government and how we see our history; how important that is,” the prime minister said.

He argued that there is a disconnect between people and the way they perceive the country’s vital institutions, which leads to a devaluation of these institutions in people’s minds.

“The irony, of course, is that the more we devalue our history, we devalue our monuments, we devalue our civil bureaucracy and our administration, the less likely they are to operate to the standards you want them to. they respect,” Holness said. .

Davis, in his speech, said the people of Hanover are proud of Sir Alexander, who was from the parish.

“As Hanoverians, we are very proud of the fact that not only is he a national hero, not only is he the founder of the Jamaican Labor Party, not only is he one of the champions of the working class, he is the first Prime Minister of independent Jamaica and, more importantly, he hails from the beautiful parish of Hanover, a small rural community called Blenheim – and we are proud of that,” Davis said.

She noted that the placement of the statue at the library will arouse the interest of city residents, passers-by and those who visit the library for research.

Davis also said the story of the Jamaican hero, who helped pave the way to the country’s independence, must be told.

The statue was sculpted by renowned visual artist and educator Scheed Cole, who has also done statues of Bob Marley at the Trench Town Culture Yard, as well as the Diamond Heroes float for the Jamaica 60 parade. He has also worked for Flow, Fort Charles in Port Royal, the Natural History Museum in Kingston and the S Hotel in St James.

Cole told the Jamaica Observer that creating a statue such as Bustamante would normally take three months. However, he only had two months to complete the work after signing the contract.

“I’m very pleased with the results; the structural integrity of the artwork is good,” said Cole, who said the statue, which is made from resin materials to include recycled items such as plastics, is able to stand the test of time.

“It will last a very long time without any form of refinishing. As long as it is cared for and respected and not vandalized, it will last a lifetime,” Cole said.

Cole was educated at Mico University College and taught at various schools for 15 years before deciding in 2010 to start his businesses – Section OI, a visual arts business, and 360 Recycle Manufacturing Ltd which, – he says, turn trash into treasure. .