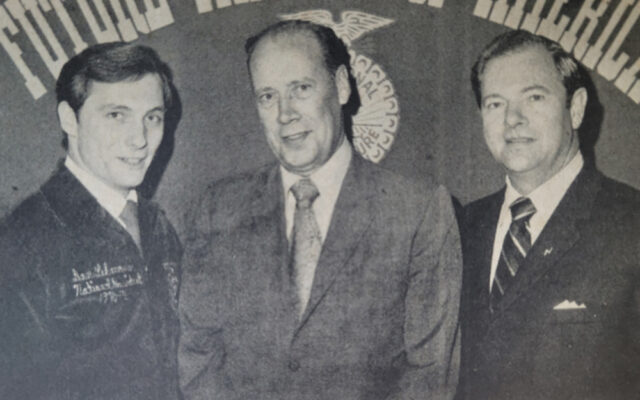 75 Years Ago – October 3, 1946 Former Marine Captain re-enlisted as Master Sergeant – Astle Ryder, 32, son of Mr. and Mrs. Alfred Ryder of Presque Isle, re-enlisted in the Marine Corps in Portland for a four-year hitch with the rank of Master Sgt.

Former Marine Captain re-enlisted as Master Sgt – Astle Ryder, 32, son of Mr. and Mrs. Alfred Ryder of Presque Isle, re-enlisted in the Marine Corps in Portland for four years with the rank of Master Sgt.

He previously served seven years with the USMC, where he obtained the rank of captain before being discharged. Overseas for three years, the former captain played in Guadalcanal, Tulagi, the Florida Islands and New Georgia. He holds the Purple Heart, Silver Star, Presidential Unit Citation with Star, Asia-Pacific Ribbon with Three Stars, US Defense Ribbon with Star, and Good Conduct Ribbon.

Dorothy Winslow appointed librarian at Presque Isle – At a meeting of the Presque Isle Library Committee, Miss Dorothy Winslow, daughter of Mr. and Mrs. Percy Winslow, was elected to serve as City Librarian. Miss Winslow was a graduate of Presque Isle High School, Bates College, and graduated in library science after spending a year at Simmons College. She had been employed as Assistant Librarian at the Social Library in Whitinsville, Mass.

Presque Isle man nominated to power by car dealers – Two men from Aroostook were appointed to the offices of the Maine Automobile Dealers Association when the organization met at Poland’s annual trade session. Olin L. Berry of Presque Isle has been appointed Group Senior Vice President and Burpee Berry of Houlton has been elected to the Board of Directors. The new president was Donald W. MacLeod of Bar Harbor. The past president was Lloyd B. Morton of Farmington. Speakers for the two-day session were Governor Horace Hildreth, Representative Robert Hale, Bill Cunningham, Boston Columnist, Dr Charles Phillips of Bates College, Walter M. Kiplinger of the National Auto Dealers Group and EG Fitzhenry, President of Massachusetts association.

Local educator honored at Capitol convention – Donald Martin, director of adult education for SAD 1, was honored by members of his profession at the annual convention of the Maine Association for Adult Education of Public Schools held on 2 October in Augusta. Martin received the convention’s first annual award as “Outstanding Adult Educator in the State of Maine.” Some 200 people attended the convention and the award was based on the nomination and vote of members. Martin was from Fort Fairfield, where he graduated from Fort Fairfield High School. He received his BA from the University of Maine and an MA from Boston University in 1957. Martin began his teaching career in 1952 at Fort Fairfield High School in the biology department. He moved to Presque Isle in 1954 to become a professor of history and government in the department of social studies at Presque Isle High School. Martin was appointed head of department in 1962.

New president elected for the NMRPC – Robert Soucy of Fort Kent and Donald C. Eisensmith of Fort Fairfield were elected respectively chairman and vice chairman of the 22-member executive board of the Northern Maine Regional Planning Commission. Soucy had represented the interests of the towns of the Fort Kent region since the creation of the Board of Directors of the Commission in 1967. After his last position as Vice-Chairman, Soucy was director and co-owner of AD Soucy in Fort Kent. He has also served as president of the Fort Kent Parish School of Religion, member and past president of the Fort Kent Rotary Club, and a member of the Fort Kent Planning Board, the Chamber of Commerce Industrial Development Committee, the Council of Parish Councilors, Knights of Columbus and the hospital finance committee. .

Whitaker joined the engineering firm – BR Smith Associates Inc. of Presque Isle announced that Keith P. Whitaker has become a partner of the firm. Whitaker was an engineer who graduated from Maine, New Hampshire, and Massachusetts. He had worked for the company for about 18 months. Whitaker had over 12 years of experience in engineering and related fields. He received a bachelor’s degree in civil engineering from the University of Rhode Island after taking physics classes at Gordon College in Wenham, Massachusetts. He was a member of the American Society of Engineers, a member of the International Erosion Control Association, and a member of the Structural Engineers Association of Maine.

Generous donation – Rite Aid officials donated $ 14,000 to the Presque Isle Rotary Club. The presentation marked one of the largest individual donations to the club and resulted in the purchase of a hemodialysis machine for Aroostook County. The club set a goal of raising $ 125,000 to create a hemodialysis unit at Aroostook Medical Center to serve the residents of Aroostook County. Those who participated in the presentation were Mark Kosakowski, district director for Rite Aid; Joe Garvey, New England Market Manager; and Brett Varnum, president of Rotary.