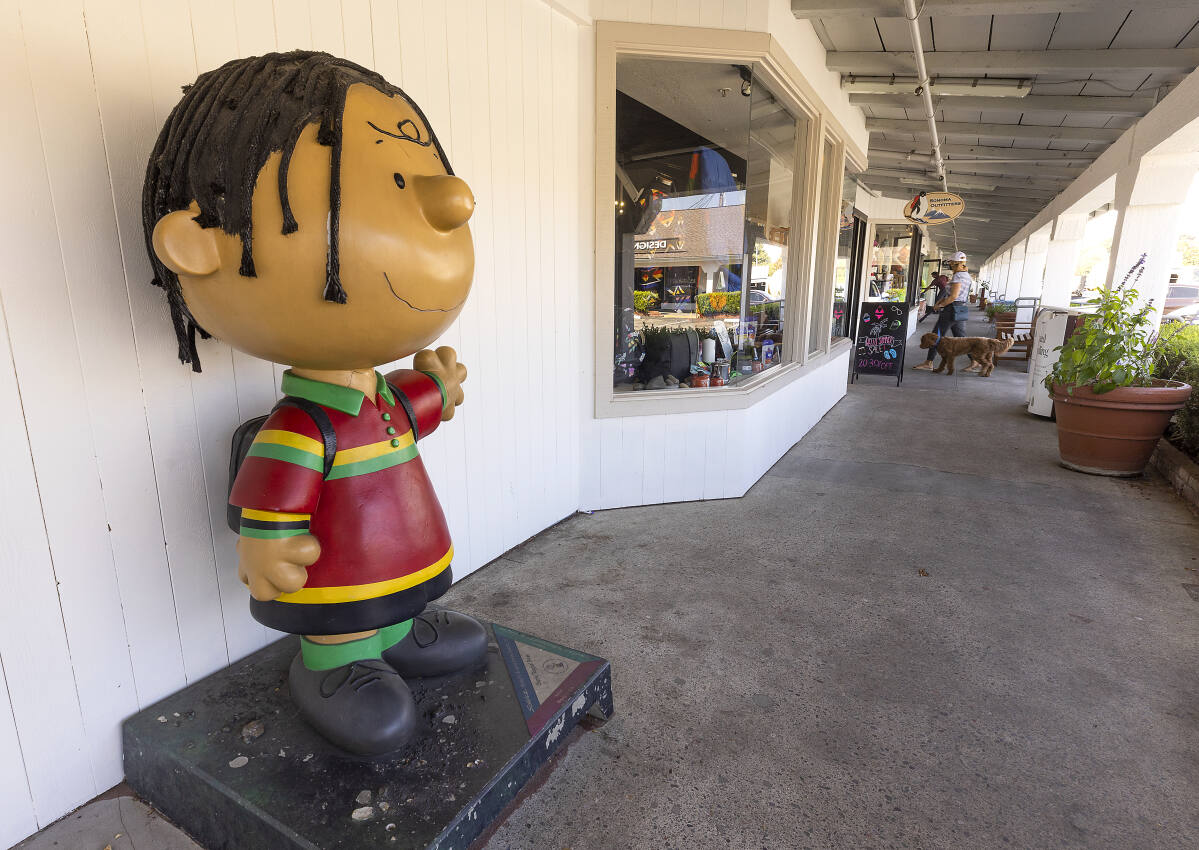 Retail space next to Sonoma Outfitters in Montgomery Village is vacant, for now. To brighten up the storefront, the mall’s new management company lined its windows with upbeat slogans welcoming shoppers to “our little slice of Sonoma County” and assuring them, “You’ve come to exactly the right place.”

The sculpture a few feet away, directly across from Sonoma Outfitters, is ostensibly excluded from that welcoming feeling.

Rasta Charlie has a bit more pigment than regular Charlie Brown and wears dreadlocks. A sentry standing outside the store since 2005, first in Railroad Square, and for the past 8 years in Montgomery Village, the statue has been a crowd favorite, according to Debra Knick, owner of Sonoma Outfitters with her son , Greg Peterson. “People love him,” she said.

But Rasta Charlie’s days are numbered there. WS Development, the Boston-based company that purchased Montgomery Village from a local family last year, determined that some mall patrons may find the sculpture offensive. Therefore, it has to go.

Earlier this summer, Knick said, a middle-aged woman came to Sonoma Outfitters to complain about the statue, describing it as “racist.” Rasta Charlie, she said, was just Charlie Brown “in blackface”.

“We were just dumbfounded,” Knick said. “We had it up front for 17 years” and heard no complaints. “Everyone takes their picture with him. People are contacting us from outside the region asking, “Do you still have Rasta Charlie? We are coming to your state. We want to visit all the figures.'”

Rasta Charlie was created by Sonoma County artist Maria Krahn. Her intention, she told William Johnson, author of the 2021 book The Complete History of Peanuts on Parade, was to “convey the fact that people of all ages and ethnicities come together when the music is present – ​​especially reggae music”.

Her rasta version of the Brown argyle sweater was inspired by Santa Rosa’s “Peanuts on Parade.” Beginning in 2005, the city commissioned local artists to create dozens of unique statues of the Peanuts gang. Each was decorated differently, according to the artist’s vision. Approximately 70 of the figures are on public display in Sonoma County.

The woman who condemned Rasta Charlie as a racist shared her apprehensions with Brittany Mundarain, general manager of Montgomery Village, which was sold last year by Dave and Melissa Codding to WS Development, one of the largest private development companies from the country.

Mundarain asked to meet Knick and Peterson. At the end of the meeting, she broached the subject of Rasta Charlie.

“She said she had had complaints,” Knick recalled. “And I said, ‘Well, you had a complaint. She called you twice.

Mundarain agreed, at the time, that only one woman complained, Knick said.

When asked if they could move the statue inside the store, the owners said there was no place for Rasta Charlie inside Sonoma Outfitters.

Thanks but no thanks

Knick then had a conversation with Gina Huntsinger, director of the Charles M. Schulz Museum and Research Center. Huntsinger told him that the museum would be willing to take the statue away from him, allowing Knick to receive a tax deduction. Or, if Knick preferred, the museum could pay for it.

Asked what the museum would do with the sculpture, Huntsinger told her she didn’t know.

Not wanting to risk Rasta Charlie being relegated to a dusty storage unit, or some worse fate, Knick accepted the museum’s offer.

That offer still stands, Huntsinger said in an email to The Press Democrat on Wednesday.

Although the museum had no role in the “Peanuts on Parade” statue program and had no involvement in its “organizing efforts or endorsements,” she wrote, it helps the owners of these statues to remove them. “Debra declined our offer.”

Last week, Knick was informed by Mundarain that after careful consideration and with the values ​​of diversity and inclusion in mind, the company had decided to ban Rasta Charlie from the premises.

Mundarain declined to be interviewed, but emailed a statement expressing WS Development’s desire to make all “guests feel welcome”.

“After careful consideration and consultation with community members and local organizations,” he continued, “we have come to the conclusion that the sculpture should not be on the property.”

When asked if it was true that she had received complaints from just one individual, Mundarain provided a vague response: “We had several conversations on the subject and got feedback from many parties.”

Rediscovered stained glass will be unveiled at the Reading Public Museum