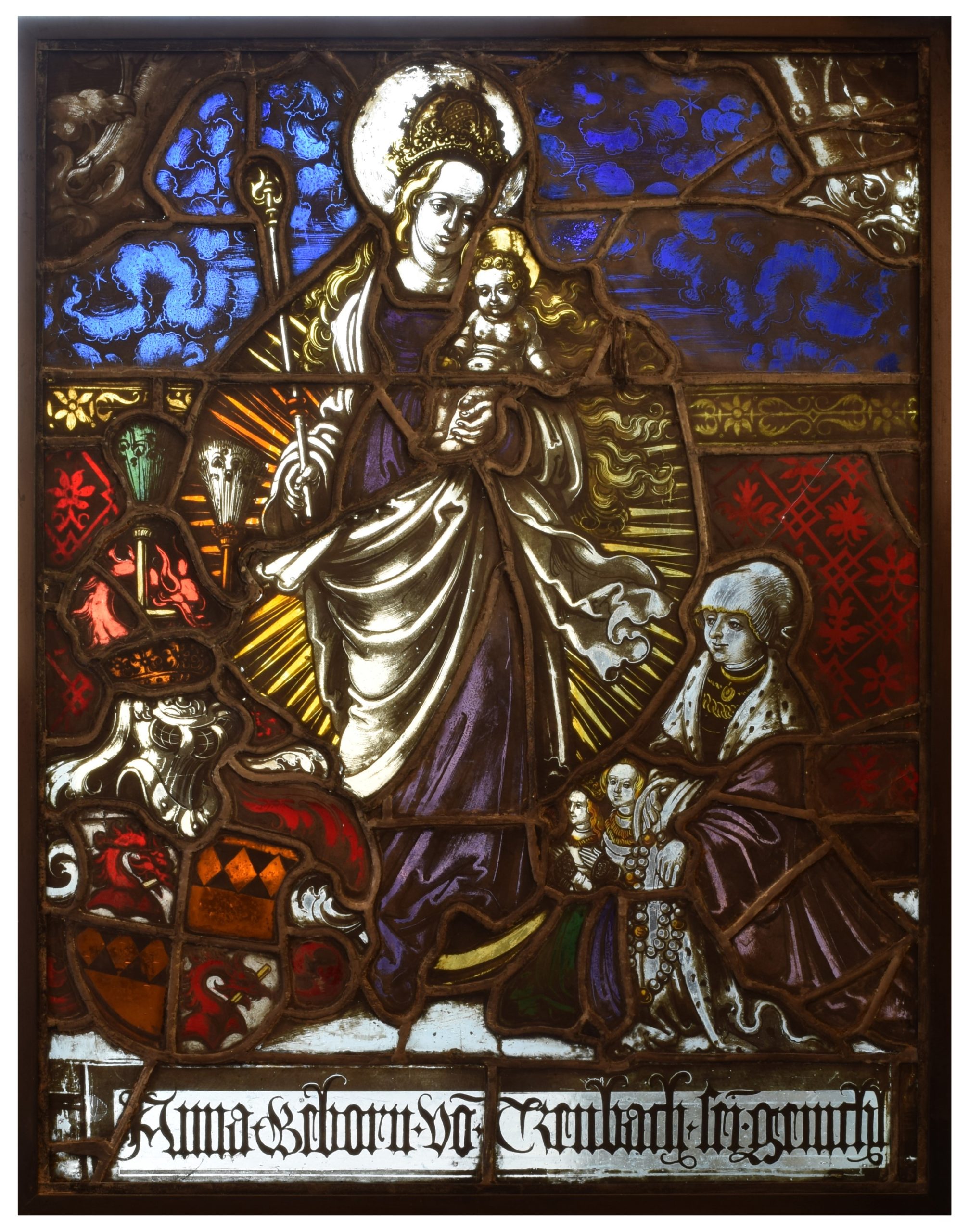 Rediscovered stained glass will be unveiled at the Reading Public Museum

The Foundation for the Reading Public Museum is pleased to announce significant new scholarship on two 16th century stained glass windows from the permanent collection. The panels will be displayed in the European Gallery on the second floor of the Museum from Thursday, September 15, 2022, in custom-built light boxes, and accompanied by text detailing their newly discovered history and attribution.

Two stained glass and stained glass panels depicting the Crucifixion and Madonna and Child have been in the collection of the Reading Public Museum since their purchase in 1933. After their acquisition by the Museum, scholars around the world lost track of their comings and goings. The windows were last displayed in 2012 in the museum’s Arms and Armor Gallery, before being removed for gallery renovations. At that time they were described as “16th century Baumgartner panels from Nuremberg” with the artist unknown and the patron only identified by surname.

In early 2022, in preparation for the reintroduction of windows to the galleries, research was undertaken to determine if more information could be learned using the panel inscriptions and known provenance as clues. It was plausible to imagine that a patron wealthy enough in the 16th century to commission several stained glass windows would be an individual whose life was well documented. Before the Museum purchased the panels in 1933, they belonged to American financier Thomas Fortune Ryan; was sold to him by prominent New York art dealers, the Duveen Brothers; and before that part of the venerable collection of Rodolphe Kann, Paris. This spectacular provenance only added to RPM’s optimism that artist and patron could be equally remarkable. As research progressed, two panels comparable to those in Reading were found in the collection of the Metropolitan Museum of Art in New York, attributed to the Bavarian court painter Hans Wertinger (c. 1465 – 1533). Their similar artistic style, inscriptions of the Baumgartner surname and Kann provenance, formed the basis of the Museum’s hypothesis that the Reading panels might also be by Wertinger’s hand.

Catharine Ingersoll, Ph.D., associate professor of art history at the Virginia Military Institute and scholar whose research focuses on the visual and material culture of southern Germany in the late Middle Ages and the Renaissance, was contacted to provide its professional opinion. Ingersoll confirmed the Hans Wertinger attribution of the Museum and was able to offer identities to patrons. According to Ingersoll, the panels were probably made by Hans Wertinger alone or with his workshop, in Landshut, Germany. They were commissioned by Peter Baumgartner and his wife Anna von Trenbach for their family burial chapel in the parish church of Mining, Austria, and completed in 1524. The museum panels would have been two of at least seven stained glass windows and painted in total adorning the choir. and family chapel in the parish church of Les Mines. Others removed from the church are now part of the formidable collections of the Metropolitan Museum of Art in New York (referenced above) and the Bavarian National Museum in Munich. 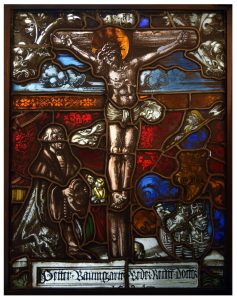 The first panel, comprising the left side of the pairing, depicts Dr. Peter Baumgartner as patron, kneeling in pious devotion at the foot of the cross during the crucifixion of Jesus Christ. Beneath the delicately painted image is a handwritten inscription reading “Petter Baumgartner Beder Recht Doctor (Peter Baumgartner Doctor of the Two Laws)” and the date “1524”. Peter Baumgartner was born around 1450 and became a professor of canon law and a doctor of civil law. One of Baumgartner’s most notable contributions is his authorship of the 1516 Reinheitsgebot, the Bavarian beer purity law. He married Anna von Trenbach in 1496, whose likeness is depicted in the second panel, crumbling before the Virgin and Child Jesus with the inscription “Anna geboren von Trenbach sei gemahel (Anna née von Trenbach his wife).” The young men pictured behind Peter and Anna remain unidentified, but are believed to be either their biological sons or Peter’s nephews (Hanns and Jorig Baumgartner), who inherited Peter’s estate when he died a year later creating windows.

The research on behalf of the museum was led by Collections Manager and Registrar, Ashley J. Houston, who notes that “The Reading Public Museum is thrilled to present these incredible windows with their full story for the first time, just under 500 years after they were created. Panels have always been admired at the Museum for their craftsmanship, quality and detail. Our newly acquired knowledge allows us to place the stained glass windows in the larger context of history, Renaissance artistic patronage and the work of Wertinger, which will only serve to enrich the understanding and appreciation of our visitors here at RPM. The Museum particularly thanks Catharine Ingersoll for her contribution to this important research project.

A German-style unveiling reception and beer tasting will be held at the Museum on Thursday, September 15, 2022 with Catharine Ingersoll, Ph.D., speaking on the rediscovery and attribution of the windows, the Baumgartner family, and the making of stained glass in 16e Europe of the century. The reception and conference will be open to all: $10 members/$20 non-members. Contact Lindsay Crist at [email protected]ngpublicmuseum.org to register.