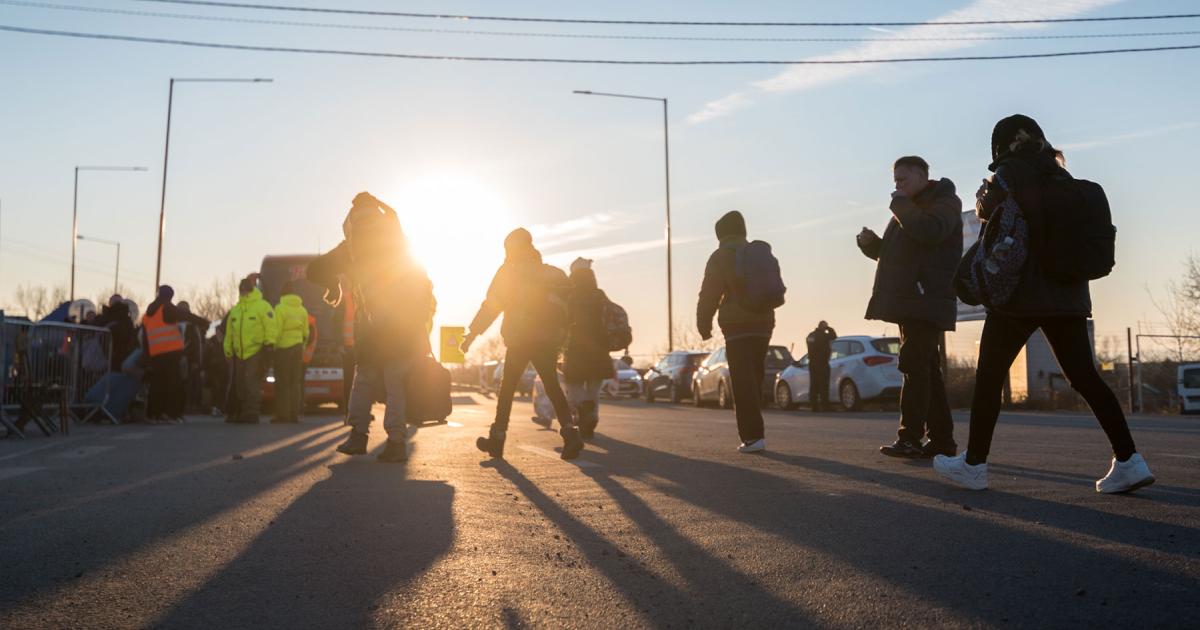 Slovakia: “A test of our faith, in deeds and deeds”

LWI – As refugees from Ukraine continue to stream into the country by the thousands every day, the Evangelical Church of Augsburg Confession in Slovakia is opening its arms to welcome those in need.

Supporting People and Churches in Ukraine

As of March 23, UNHCR figures indicated that more than 260,000 refugees had crossed the Ukrainian border into Slovakia. At the largest Ukrainian-Slovakian border post, Vyšné Nemecké, a panoply of emergency relief awaited them – providing for the most basic needs through hot drinks, soup, hygiene items, clothes, heated tents for a moment of rest and volunteering. working to match refugees with accommodation options throughout Slovakia.

A volunteer shares information with a refugee family who recently arrived in Vyšné Nemecké.

Patrik Purchart is one of dozens of volunteers who serve the Diacon Lutheran tent in Vyšné Nemecké on alternating 12-hour shifts – day and night. Here, refugees can find space to rest and warm up, something hot to drink, and find someone to guide them through the “tent city” of support stations that has emerged around the border crossing.

“The situation is really desperate,” says Purchart. “We see people arriving who have just fled the bombs that are falling, and who sometimes arrive without even a second underwear.”

He continues: “Yesterday, I helped a little girl. She couldn’t find her mother, so she asked me ‘where is my mother?’. The second question was ‘Is my mother alive?’.

Maria Bychko from Charkiv arrived at the Vyšné Nemecké border post in Slovakia with her six-month-old child. She says it was terrible to have to go into exile, to leave the world she knew, but with her hometown destroyed by bombs, she left because she was afraid for her child.

With a quick response comes the risk of lack of coordination, an issue that was addressed early on at Vyšné Nemecké, Purchart says.

“Everyone is trying to do something, and it’s crucial in this situation not to duplicate work. It doesn’t matter whose name is on the box. What’s important is that the refugees have something to eat,” Purchart says, explaining that each tent seeks to offer something different.

A family eats soup at the Vyšné Nemecké border crossing between Slovakia and Ukraine.

Witnessing to the Gospel – with Open Arms, Homes and Churches

At the Lutheran Church in Partizánska Ľupča there is a small congregation with a long history, which responded to the situation of refugees by collecting financial donations, arranging accommodation in connection with the centuries-old presbytery and welcoming refugees into homes devotees.

With a membership of 150 faithful, the congregation now welcomes 82 Ukrainian refugees – 22 of them housed next to the presbytery and 60 of them in the houses of the faithful.

Reverend Jan Molcan of the Evangelical Lutheran Church in Partizánska Ľupča watches Ukrainian refugee children play in their home in the parish.

“This time is a test of our faith, not only in words but also in action,” said local pastor Reverend Jan Molcan. “Members of my congregation are very down to earth, they may not know the Bible very well, but they understand the meaning of the gospel. They are definitely helping.

The arrival of the refugees also caused an unexpected meeting of traditions in the church.

“Some of the refugees came to church on Sunday bringing an icon with them because they are Orthodox. I put the icon on the altar and said ‘welcome, this is your church now too’ We have now moved the icon to rest on the baptismal font. This way they can kneel before it when they come to church. But also, in baptism, we are all one family,” says Molcan.

An Orthodox icon sits on the baptismal font of the Evangelical Lutheran church in Partizánska Ľupča. The icon was brought to the church by Ukrainian refugees currently being hosted by families in the congregation, and the local pastor placed it on the baptismal font as a sign of hospitality to the refugees, and as a symbol that “in baptism, we are all a family’.

“We never thought there would be war”

At the Lutheran church in Poprad, a group of families with disabled children found refuge.

Tatiana (Tanya) Radchuk, along with her husband and daughter, were able to flee their home in Bila Tserkva with the support of the Red Cross.

“I kept saying ‘there’s no way there’s going to be a war’, and my husband just said ‘wait and see, it can happen’,” Radchuk says and continues: “ We were a mixed city of Russians and Ukrainians. There was no problem, we were just friends, living together. We were brothers and sisters.”

“The first boom, the missile when it hit, I didn’t think about it. But the second, I looked outside to see what was going on. The third made me realize, ‘oh my God, they literally bombard us’,” she recalls. “Kids are now asking when we can go home, and if they’re going to kill us if we come home.”

For Jana Kovalcikova, director of a youth center in the nearby town of Veľký Slavkov where more than 30 refugees are currently staying, the response from local communities in the region is a miracle.

“Our friends and our community reacted very quickly and immediately. We needed a washing machine, some hygiene items, and they brought it to us. Someone was able to run some errands for us. It’s like a miracle, because now we can cook for them and we can provide them with what they need,” says Kovalcikova.

See “Living Christ” on the Faces of Refugees

And from Eastern District Bishop Peter Mihoc, whose office coordinates refugee accommodation in parishes across the country, the focus of this year’s Lenten season is clear.

“Our fasting this Lenten season will consist of helping those in need, as some are already doing: handing out a cup of hot tea at the border, getting up in the middle of the night to fetch and drive people to the border, or open their own homes,” the bishop said while preaching to the Pozdišovce congregation earlier this month.

Bishop Peter Mihoc of the Evangelical Church of Augsburg Confession in Slovakia (Eastern District) shares a word of prayer for Ukraine during Sunday service in Pozdišovce, Slovakia. Pozdišovce is closest to the Ukrainian border of all church congregations, and so the church here plays a key role in supporting incoming refugees fleeing war in Ukraine to Slovakia.

Turning to this easternmost congregation of his church, Mihoc reflected, “We see in the faces of the Ukrainian refugees, the living Christ. We see the suffering Christ who traveled because of the pride of those behind the attacks.

Supporting People and Churches in Ukraine