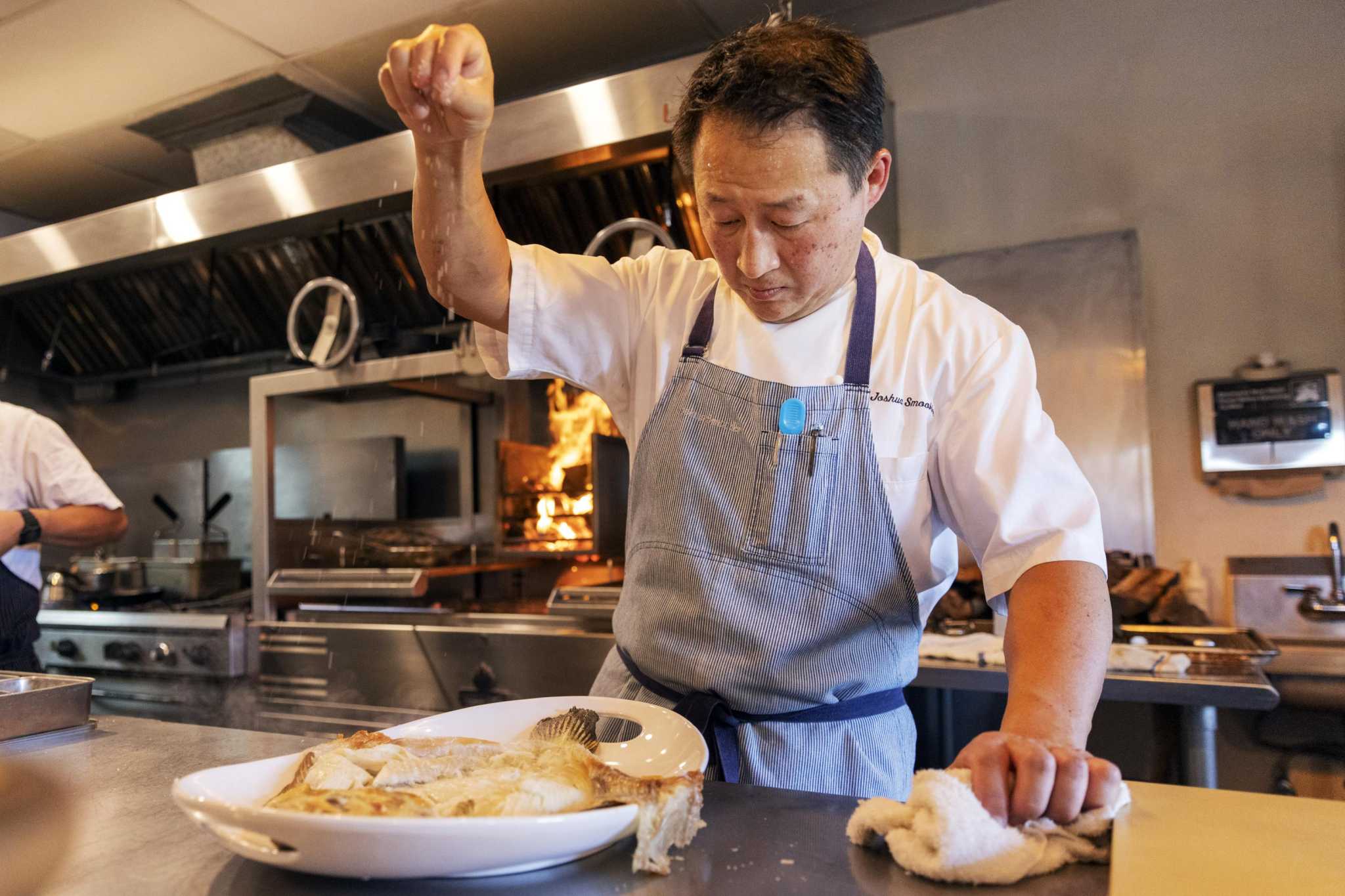 I really like the look on people’s faces when I try to explain Animo, a restaurant that quietly opened on Sonoma County Highway 12 earlier this year.

It looks like a seaside Basque restaurant, I say, but the chefs are more open book than it looks. Yes, there is magnificent seafood, the skin and shells of the creatures cracking and blistering loudly over a blazing hot log fire, as is the case in the Basque Country. But you pair these dishes with kimchi fried rice, tossed with pastrami flown in from New York, or steamed Manila clams, served with chorizo ​​and a vibrant, fishy nam jim dip.

That’s all to say that Animo, run by owners Heidy Mu He and Joshua Smookler, is a singular restaurant. Not just because of its unique menu, which is executed by the team with a finesse worthy of a gourmet restaurant. What makes it stand out is how much of a culinary middle ground it occupies in an area where ambitious restaurants typically focus on tourists and Michelin inspectors.

Rather, without an elaborate resort setting or other upscale wine country touches, Animo seems designed for locals hoping for a fun night out to eat something special. Although for anyone outside of North Bay, these qualities are also worth it.

At best, dinner at Animo is a torrent of sensations and little moments that will have your head turning in pleasure.

In Smookler’s riff on the Japanese ochazuke ($45), there’s the tender bite of perfect pearly rice that holds up well in a dish where butter-poached lobster is the star. But then your attention is drawn to the tiny haystacks of XO sauce, rich in savory shreds of ham and dried seafood. Rice and lobster are an island in a sea of ​​shiitake and lemongrass tea rippling with earthy, citrusy aromas.

In an effort to experiment as much as possible, I rarely order the same thing twice when scouting restaurants, though here I had to repeat myself with the snow peas ($12). Usually, these juicy seasonal treats are processed simply: perhaps sliced ​​into a salad or blanched to serve with beurre blanc. But here, the peas see the fire directly, with the arctic char flecks imparting a slight bitterness that pairs well with their vegetal sweetness.

Another rice dish, a kimchi fried rice ($20) served in a stone bowl, is packed with elemental goodness. Instead of bacon or spam, it’s spiked with luxurious slices of rosé pastrami from Katz’s Delicatessen, New York’s legendary Jewish deli. The shimmering yolk of the fried egg on top is just waiting for you to break it open and stir it into the rice. The dish is a tongue-in-cheek autobiography of the chef, an adopted Korean raised in a Jewish family on Long Island. Simple, yet exceptional in every way, this dish is something I’d be happy to come here on my own for. Particularly accompanied by a glass of one of the restaurant’s most interesting sojus.

While He, still smiling and dressed in crisp chef’s whites, runs the small dining room with another dining room employee, Smookler also takes every chance he can get to talk to the tables. Sometimes he carries a piece of well-marbled Wagyu beef or accepts an autographed bottle at a local winemaker’s party. Other times he jokingly asks if you hated food. His self-deprecating humor and rolling eyes are as much a part of Animo’s vibe as anything else.

It was Smookler who convinced me to order the turbot ($120/$140), a large flatfish imported from Galicia, Spain, and a frequent sight in Basque fishing villages. Here, the carcasses hang freely in the glazed meat fridge behind the chef’s counter, intended to be locked in besugueras, custom spade fish broiler cages. A grilling session, punctuated with splashes of a yuzu-based vinaigrette, transforms its white flesh into a silky, sumptuous mass, enriched by the fish’s abundant store of collagen.

When delivering the dish, the chef urged me to choose the spiny fins of the fish and taste them as well. Half of the bone is charred, while velvety gelatin clings to the inner half. The bright flavor of yuzu vinaigrette unites them. The tiny pleasure of sucking gelatin off a fragile, tiny bone reminded me a bit of eating chicken feet at a dim sum restaurant.

Animo’s only dessert is the Basque cheesecake ($16). Plump, barely burnt Basque cheesecake is a staple on the menus of Asian American Bay Area bakeries, but here the dish is expressed in its simplest way. The top is a distinct layer of blackened sugar and milk fat, while the center relaxes onto the plate with the ease of a long sigh. The cooked Asian pear wedges have too delicate a flavor to be a counterpoint, although they do keep the dish interesting.

Although Animo opened in February, there’s no website, and you’ll have to scour photos from OpenTable or Yelp to get an idea of ​​the menu, which changes often. What propelled it to its inception was word of mouth from Sonoma locals, who talked about it with the semi-secret air of juicy gossip. Even finding the location, sandwiched between an auto repair shop and a McDonald’s, can be a challenge.

The first time I visited I was struck by repeated scenes of different parties entering, recognizing someone in the dining room and bursting out with jubilant greetings and hugs. Everyone seemed to know each other, and they were happy to have a common secret.

You can tell this space was once a taqueria — in fact, three in a row — from the simple cream-colored tiles to the open chef’s counter. It’s easy enough to imagine a Sonoma taquero slicing slivers of bright red pork on a spit in the space the wood-fired oven now occupies. You’ll find small clues to that past life here, like the cactus-themed exterior door and a pylon panel that reads, under a white blanket, “Las Diablitas.” Gone are the sombreros and vigorous murals of Tenochtitlan; now the main wall near the entrance is dominated by a curious set of shallow shelves containing rows of rose-red apples, arranged to give their aroma to the space.

I like to think there is still some of the taqueria vibe. The space surely remembers what it used to be, and maybe that helps keep things at Animo so laid-back, family-friendly, and honest.

Transportation: Street parking, with disabled parking in front of the restaurant.

Mothers help each other through local Facebook groups – Boston 25 News