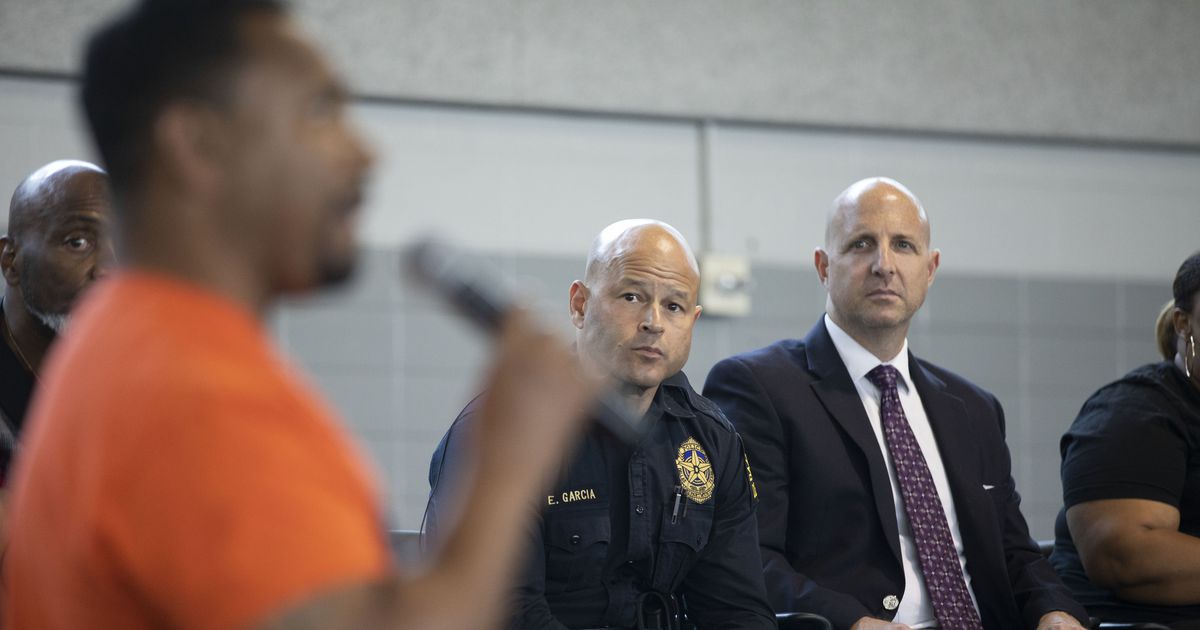 Among the dozens of people crammed into the Juanita J. Craft Recreation Center Saturday afternoon were three women connected by the topic on the agenda: the cost of gun violence in Dallas.

Shalonda Gilmore’s son Kealon Gilmore, 26, was killed in a mass shooting at a concert southeast of Oak Cliff that injured 16 others. Adriana Vasquez’s son, Fernando Enriquez Jr., 22, was killed in a Far East drive-by shooting in Dallas. And Chi Ballard’s son, Zuri Goff, 19, died after being shot in the drive-thru of a Raising Cane’s at Red Bird.

The South Dallas event, titled “Enough is Enough – Stop the Violence,” allowed residents like them to speak directly to community leaders to come up with crime prevention strategies and put them into action. The panel was led by Police Chief Eddie García, who was joined by a city council member, pastor, judge, local nonprofit landlords and other advocates.

The conversation followed a series of violent crimes in South Dallas, including two mass shootings – one at the Oak Cliff concert and another outside a South Dallas party – that killed two people and injured 25 others. Other recent crimes in Dallas include a series of shootings at Asian-run businesses being investigated as potential hate crimes and a shooting in Deep Ellum that left two dead and three injured.

“The last few weeks in our city have been difficult for all of us,” García said. “We’re not going to stop to get out of this.”

García previously said the department was focusing on the southern part of the city and that the increased presence of officers has led to a drop in violent crime.

Department statistics updated Friday show violent crime is down in the city’s southeast, south-central and southwest divisions, where there have been a total of 2,205 violent crimes this year, or 150 less than at the same time in 2021.

Citywide, murders rose to 88 from 76 at the same time last year. While García regularly praises the department for improving those statistics, he added Saturday that he fears 90% of those killed in Dallas are black or Latino.

“Even if we reduce violent crime, we shouldn’t jump up and down if this disparity still exists,” he said. “We all know we didn’t get into this mess overnight and we’re not going to get out of it overnight. We must reinvest not only in our community, but also in individuals.

As part of this reinvestment, several residents have called for more opportunities for youth in their communities, such as recreational sports, summer jobs and internships with local businesses. Others spoke of job opportunities for people with criminal records to prevent them from becoming repeat offenders.

Part of Saturday’s event included a job fair open to these residents — which was notable for Victor Alvelais of Dallas CRED, an extension of the nonprofit National Youth Advocacy Programs, who said he attributed the concentration of crime in South Dallas to poverty.

“We have to fix it,” Alvelais said. “Nine times out of 10, [crimes] have an economic link.

But García argued that two things can be true at the same time: While he recognizes that poverty leads to violent crime, reducing it won’t lead to the progress the city needs without more short-term solutions.

“Even investing in our communities today will not result in people not being killed this weekend,” he said.

García acknowledged that there are no easy answers, but said he plans to continue hosting community discussions in hopes that they will not only bring together more people, but the variety of ideas brought forward. will create positive change over time.

Ballard, Zuri Goff’s mother, said it was just as urgent to start small – one person at a time.

“We want our kids to be safe…but we have to start reminding them of who they are,” Ballard said. “No, you’re not a gangster, you’re a police captain. No, you’re not a thug, you’re a mentor. You are not what society told you you are, what you should become.