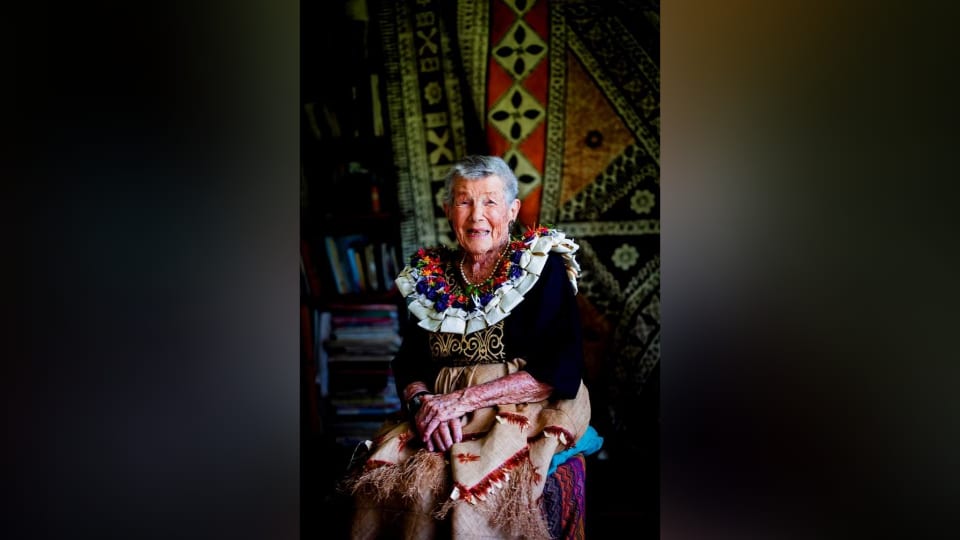 Jean Elizabeth Brown was born in Suva on November 21, 1922. Many grandparents and great-grandparents who are still there may remember her as a longtime civil servant and as Stanley’s wife Branson Brown – the man who founded what is now known as the Republic of Fiji Navy.

When the Fiji Times visited the centenarian at her home in Vanua Levu, where she lives with her daughter Katrina and son-in-law Peter, she sat in front of a large window in their living room, overlooking a meadow and the Great Range mountain range that divides Fiji. second largest island.

She may be 100 years old, but Mrs. Brown is quick-witted and quick-tongued, she is witty and has a superb sense of humour.

She is the great, great-granddaughter of David Whippy of Nantucket Island, Massachusetts, United States of America, through his daughter Keziah from his marriage to Adi Toakasa Delau, then daughter of Tui Levuka.

Keziah married Isaac Hathaway and they had a daughter named Alameda, who married John Sinclair Dods. John and Alameda settled in Savusavu, where they had a son named John Robert Dods, who later married Irene Hawkesly.

She is the eldest child of John and Irene.

Raised on the family estate of Balaga, nestled on the edge of the blue expanse that is Savusavu Bay, they lived plantation life – which revolved around the price of copra and its shipment to the Levuka mill.

Ms Brown grew up during the Great Depression and remembers her grandparents talking about the price of copra, which had fallen to £2 per tonne.

His description of the period sounded like very dark days. His father managed copra plantations, fought in the Great War and was later employed by the colonial government to build the roads around Savusavu – by hand.

The road was built to Savarekareka – where St Andrew’s Parish and St Bedes College are today – a stone’s throw from their home. Given the proximity of his father’s construction site to the house, they would sometimes walk to where the work was being done for a picnic with him.

Although they never went to church, they said their prayers to each other at home and had very good relations with the Catholics. Ms Brown believes her grandparents were influenced by the Quakers – a collection of historically Protestant Christian denominations known officially as the Religious Society of Friends.

She was taught to write on slates and was made to read every afternoon by her grandmother, for which she remains grateful to this day.

About 18 months after he was born, his mother gave birth to a daughter named Margaret, giving him a sister. There would be a gap of five years between the birth of his sister and that of his three brothers.

The Dods boys – Jock, Bob and David – were born in Rotuma after his father was sent there by the colonial government to build the road. At that time, she and her sister attended Levuka Public School and lived with their aunt, whose husband worked in the Department of Agriculture on Ovalau Island.

She and Margaret would spend their Christmases in Rotuma with their parents, until their mother died due to complications in childbirth. After the tragedy, the children moved in with their aunt, uncle and five cousins.

Later their uncle would be posted to Suva, the whole family followed suit and rented a place in Knollys St and Nasese for around £10 a month – which was considered expensive at the time.

She attended Suva Grammar School and as a teenager her aunt watched all the children very closely. Ms Brown said she remembered her as a smart woman, who could do anything from scratch, as many women at that time could.

The food was always good and she made all the kids’ uniforms. When he completed the road in Rotuma, Mrs Brown’s father went to work in the Mount Kasi mines in Bua, while his children attended school in Suva.

While in ninth grade and doing shorthand, she returned home to learn that her father had died in New Zealand, having traveled there to tend to an old war wound that had come back to haunt him.

The next day, as she was putting on her school uniform, Ms Brown was told she would have to go to work because of her father’s death – leaving her just shy to finish school.

She learned shorthand and the rest of the typing course and went to work for the Western Pacific High Commission as a junior typist. In April 1946, after a few years at the commission’s headquarters in Suva, she came across a vacancy at Fiji timewhich literally changed his life.

The colonial government of the Gilbert and Ellice Islands was moving the capital from Betio Island to Bairiki Island – the two islands that make up Tarawa Atoll – and they needed staff members to run the show.

So, Mrs. Brown applied for the post of Secretary to Resident Commissioner and was accepted. A few weeks later, she was called and told she had gotten the job. In what would have been the equivalent of a boarder getting her list of items for school, Mrs Brown was given a list of food and clothes she needed to take with her – as there weren’t many of shops on Bairiki atoll compared to Suva in 1946.

She did her shopping and on an overcast morning in Suva in May 1946, closed her suitcase and took it out onto the veranda of their house.

Her heart was heavy because she was leaving the family she had grown up with for nearly 20 years, leaving for a trip to an island in the middle of the Pacific Ocean that she had never heard of before applying for the job. .

Her taxi arrived and she went into the kitchen and said goodbye to her aunt. The taxi took her to Kings Wharf in Suva where she boarded the Tamatea, whose captain – Captain Hamilton – whom she described as “a superstitious and austere Scotsman and a sea dog if ever there was one.” a”.

Mrs. Hamilton ran the galley on board. The ship left the dock and soon after was crossing Suva Passage. If he didn’t bid farewell ashore, the swell at the harbor entrance certainly seemed to order him to stay. Ms Brown said she remembered it being so difficult that she swore if she could have landed she might not have left Fiji again.

The Tamatea had to take shelter in Nadi Bay and adjustments were made to the placement of the cargo in the hold to raise the bow higher out of the water. Fortunately, Joyce Beddoes, whom Mrs. Brown knew from Suva High School, had applied to work at the Treasury.

And she and Mrs Brown traveled to Tarawa on the Tamatea as part of the first group of staff – all mostly in their twenties or thereabouts. The passenger manifest also included a young Australian radio operator named Peter Allen.

He had worked as a radio operator on Canton Island in modern Kiribati and was being transferred to the Gilbert Islands. Ms Brown said Ms Beddoes and Mr Allen spent a lot of time together on the trip and by the time the Tamatea arrived in Tarawa they were engaged.

The speed of their relationship came as a shock to Mrs Brown, her aunt’s upbringing leaving her devoid of any knowledge of men.

Mrs Beddoes then returned to Suva and married Mr Allen, but Mrs Brown chose to remain in Tarawa. Join us next week as we take a closer look at his life and times on Tarawa.