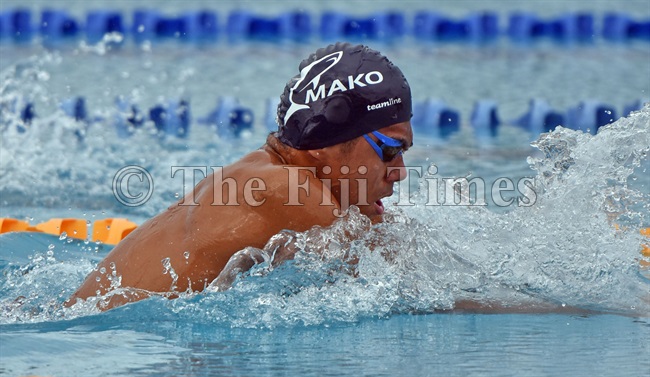 The Fiji Times » Reps back in the pool

The Fiji Short Course Swimming Grand Prix today in Nadi will give young swimmers a platform to showcase their talents.

The grand prix has seen swimmers rise to the occasion and reach international competitions such as the Commonwealth and the Olympics.

Taichi Vakasama set a record by competing at two Commonwealth Games and his first Olympics, represented Fiji in the men’s 200m breaststroke heats at the Tokyo Games. He was the flag bearer for the Fiji team.

After a successful outing at the FINA World Swimming Championships in Budapest and later a rigorous pre-match training camp at Winchester Sport and Leisure Centre, the team consisting of Vakasama, Rosemary Rova, Epeli Rabua, Hansen McCaig, Tolu Young, Temafa Yalimaiwai, Cheyenne Rova and Kelera Mudunasoko did well. It was also Fiji Swimming’s largest team at any Commonwealth Games with a total of eight swimmers comprising three women and five men.

For the first time in history, the men’s 4x100m freestyle relay team reached the final and finished in 8th place.

Natogadravu, the son of Tailevu Epeli Rabua will participate in the Grand Prix today.

He said that regarding the Grand Prix, it would be interesting because after competing at the Commonwealth Games the facilities were closed.

“We weren’t able to swim and that added to the fact that we just finished a long journey back and trying to readjust to the time zones,” he said.

“I have two pieces of advice that I would give to young swimmers or any other young athlete. The first is that it will be extremely difficult.

“Second, don’t forget to have fun.” The Nadi competition begins at 8am today at the Nadi Sports and Social Club pool.

“Line through our hearts”: A village in Kashmir, 75 years after partition