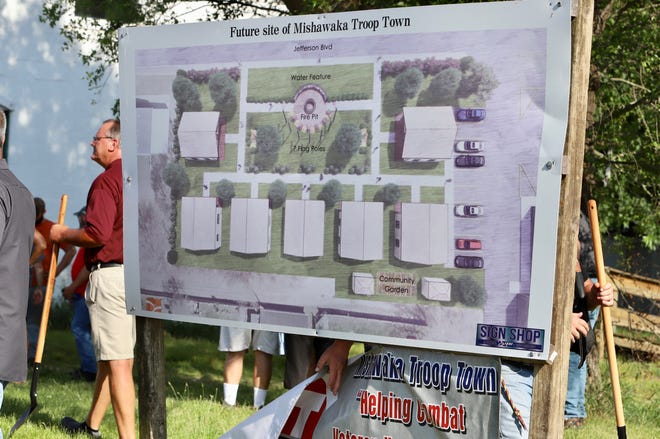 MISHAWAKA — Jim Metherd told a group at VFW Post 360 that he dreamed in 2015 of establishing a site for a small village of houses for transitional housing for veterans.

“This dream came true when Jack Champaigne said, ‘Hey, let’s make this happen’ and start a fire under my boat,” Metherd told the group of city officials and others gathered to the event. “We officially launched our fundraiser in February 2021, and we are very happy to say that we have raised a quarter of a million dollars.”

In newly purchased land immediately west of Veterans of Foreign Wars Post 360 on East Jefferson Boulevard, shovels have turned land into land that organizers and others hope will be a refuge and aid for veterans who will be served here.

Beginnings:Plans are taking shape for a small village in Mishawaka for homeless veterans

The small village will consist of four duplex units for homeless veterans who need a short-term stay. These will be 350-400 square foot homes with a caretaker unit that Metherd expects to live in at first.

The plan for the transitional housing program in the East Side neighborhood has had its critics. For a year it was debated by neighbors who questioned whether the site was suitable. The City Council even held a committee meeting in February to try to obtain from the organizers and neighbors the answers necessary to understand the project.

Organizers initially secured city approval for rezoning on the site adjacent to the VFW substation. But when the VFW offered a 2-acre lot on the north side of Jefferson, closer to the owners on Maplehurst and Borley Avenues, the organizers considered it, but some neighbors balked because of the village’s proximity to their houses.

Organizers eventually decided to return to the south side ground next to the post, but it faces much greater site preparation costs.

City Council was well represented at the groundbreaking and Mayor Dave Wood thanked Councilman Mike Compton for working with neighbors and Troop Town organizers to get questions about the project answered.

“I can tell you this city loves this project,” Wood said. “We love any project that recognizes and serves our veterans, those who gave us the freedoms.”

The plan for the future is to clear the property of its existing buildings and have the land cleared by the end of the year.

If all goes well, Metherd said he has secured the engagement of a Fort Wayne architectural firm to draw up detailed plans for the development.

He hopes construction can begin next spring on the $500,000 project.

Although half of the cost of the project has been raised, organizers say they will continue to fundraise for the rest. Metherd also requested a $324,000 contribution of federal COVID relief money from the city, but that request is still pending.