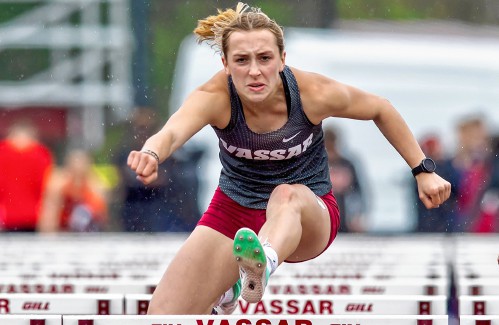 Faye Stevens is a poster child for avoiding majoring in sports in high school.

The Barnard resident and Woodstock High alumnus played football and ice hockey and ran track for the Wasps. She recently completed a spring as a heptathlete at Vassar College in Poughkeepsie, NY, building on the comprehensive athletic skills she learned through these three sports.

The freshman broke her own school heptathlon points record at the Atlantic Region conference track championships. This event includes the 100 meter hurdles, the 200 and 800 meter races, the high jump, the long jump, the shot put and the javelin.

“The ability to shift her body weight can often be overlooked, but Faye does push-ups and pull-ups with ease while launching over seven feet into a wide jump,” said Vassar strength and conditioning coach Alice Read. , in a press. Release. “That combination of energy and hard work sets her apart.”

Stevens said hockey was her first inclination when she thought of college sports. However, she discovered more interest from track coaches, despite Woodstock not having a track. Vermont state rules allow competitors to compete in only four events at a meet and the 100 and 300 meter hurdles were Stevens’ main pursuits.

“Practicing them on the grass was pretty crazy,” she said. “I didn’t even know if they were the right distance.”

It was unclear what the athletic situation would be like in Vermont and Woodstock once COVID-19 hit, so Stevens opted for a preparatory school year at Northfield Mount Hermon in Gill, Mass. NMH says that, with teams in 20 sports, it has “one of the broadest sports programs among high schools in the United States”

Stevens performed well enough on the track and in the classroom to be recruited by Vassar, the second-highest degree-granting college for women in the United States.

The institution became coeducational in 1969, has around 2,500 enrollees and boasts among its notable graduates Jaqueline Kennedy Onassis and actresses Jane Fonda, Meryl Streep, Anne Hathaway and Lisa Kudrow.

Due to the pandemic, Stevens was unable to visit any colleges in person. However, Vassar’s coaches were keen to recruit her through Zoom, and she applied and was admitted through the early decision process.

“When you feel really wanted, you’ll want to be there,” she said.

Vassar will make his indoor track debut next winter. This means Stevens is likely to compete in the pentathlon, which includes the 60m hurdles, high jump, shot put, long jump and 800m run. She feels comfortable with the high jump but not yet with the shot put, laughingly saying her goal has been not to finish last.

“I felt a bit unprepared at the start of this spring season, but it’s all good,” Stevens said. “We just threw ourselves in there and saw what came of it.”

This summer, Stevens is practicing the javelin in his backyard, throwing a spear at his family’s apple trees. She is also getting her wilderness first aid certification and thinking about how to meet the requirements to become an emergency medical technician.

Academically, Stevens leans toward a double major in biology and a broad field called Science, Technology, and Society.

“There’s nothing I can complain about in the least,” she said. “I’m pleasantly surprised at how the first year went and I surprised myself. I’ve learned not to doubt myself and can’t wait to see what happens next.

Tris Wykes can be reached at [email protected]