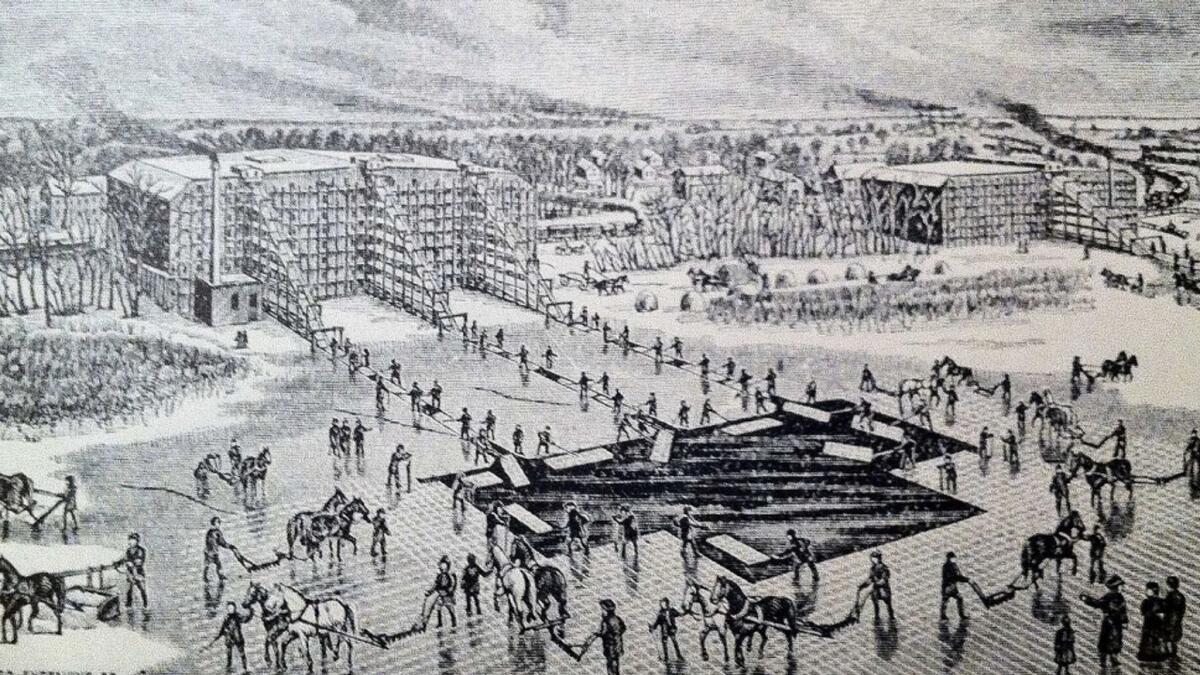 Jonathan Smyth’s Times Past column this week recalls Robert Montgomery of Derrywinny, Kilmore who went on to become one of the largest suppliers of ice cream in the United States…

Derrywinny is located in the electoral district of Killykeen in the civil parish of Kilmore. In 1896 the Irish naturalist, writer and librarian, Robert Lloyd Praeger, wrote an essay in which he mentioned that this town had a bog containing “several rare plants”; flora which included the ‘Great Sundew’, Marsh Andromeda and White Beak-rush.

In Irish, Derrywinny becomes the pleasantly spoken ‘Doire Bhainne’, meaning ‘the milk oak wood’. It was in this pleasant-sounding place that William M. Montgomery was born. It grew to be one of the largest ice cream makers in all of America.

So who was that Iceman from Derrywinny? No, he wasn’t a superhero from a marvelous comic book, or a character in a science fiction novel. William M. Montgomery became an ice cream tycoon, and with the help of his brother Robert Montgomery, they kept Americans cool for years.

William emigrated from Cavan to New York in 1863, where he and his brother Robert went on to found the William M. Montgomery Ice Company in 1879. They harvested large quantities of blocks of ice and soon became important ice merchants . Montgomery’s keen sense of composure helped the company grow, supplying large quantities of product by new routes across New York State and further afield for export.

William made his brother Robert a business partner, and after William’s death Robert became president of the company. William M. was born at Montgomery Farm in Derrywinny, not far from Cavan Town in 1845. He also had an older sister Mary who was born in 1841.

You probably haven’t heard much about ice harvesting work, and I doubt readers have seen it in the jobs section of a newspaper either. Ice harvesting was a major activity in the 19th and early 20th century, when fresh produce was collected in Norway and along the eastern seaboard of the United States. It was a licensed business, for example, in 1890 the Montgomery Ice Company applied to renew its license for the ice dredging, tally house and scales at the 40th Street wharf approach , at North-river. Another account says they kept coolers near the Hudson River at Cooper’s Island.

Called ‘cold weather culture’, the ice was cut from frozen lakes and rivers at the start of winter and stored in blocks in coolers to be sold as a cooling agent to keep food cold at a time prior to the invention of electric refrigeration. Drinks need ice, too, and I’m sure plenty of workers enjoyed a cold libation after a day of gliding down the frozen Hudson. It was hard work, that’s for sure, and there had to be at least a foot of ice on the water before the ice men could get stuck in it, using either a handsaw, or an “electric saw blade”. I’m sure Health and Safety would have had a day in the field had they been there during an ice harvest.

Mind you, when it came to their homeland, staying in touch was something the family never let up on. The Montgomerys stayed in touch with Cavan. William’s brother Richard and his wife Elizabeth lived in Derrywinny and when William M. died on February 10, 1898, news quickly crossed the Atlantic and appeared in the pages of the Cavan Weekly News. They called it a great Cavanman and the toast of New York’s great ice cream makers.

To New Yorkers, William was a public-spirited benefactor whom Cavan’s reporter described as “honourable, intelligent, and upright in all his dealings; prominent as a reaper and ice-merchant; quite pragmatic… an excellent adviser.’

According to friends, his infinite energy always seemed to display a limitless nature.

He was busy in his “great coolers” at Rensselaer, Rensselaer County, east of the Hudson, when he fell ill. Poor William developed a severe cold, but luckily managed to finish that year’s harvest. Two weeks later, Montgomery returned home to New York for his recovery. The disease could not be shaken, his condition worsened and typhoid took hold. Death soon followed.

An obituary noted that Montgomery had a good reputation and how politicians invited him to run for election as a local district alderman. He successfully defeated a Democratic majority, then later took a seat in the State Assembly, serving only one term. But harvesting ice was his primary passion and he would not fully engage in politics.

When a publication for ice harvesters called “The Ice World” was launched, William offered encouragement and often provided valuable advice in his columns. The reporter concluded that William had been a ‘kind and devoted husband, parent, brother’ and friend of the reporter who wrote the obituary in the Cavan Weekly News.

After William’s time, Robert served as president of the company until his own death on December 8, 1904. Barely fifteen days had passed since Robert’s death, when a New York newspaper, The Sun , released a report on Dec. 30, which signaled a betrayal of upcoming terms for the ice cream business when a “bankruptcy petition” was filed against them by a creditor. At the time, the company’s stock was wholly owned by the Montgomery family, and The Sun listed more of Robert’s relatives, including John W. Montgomery, vice president; William E. Montgomery, secretary; and Frederick H. Montgomery, treasurer.

In 1905 fears were confirmed when the ‘Cold Storage and Ice Trade Journal’ reported how ‘the company was alleged to be insolvent and on December 1 (1905) paid $1,500 to Peter A. Whitbeck, a creditor’.

Who was the real Saint Felim?

The group of runners progresses towards “autonomy and freedom”